In motorsport, every second or even a hundredth of a second can be critical. Nowadays, when marginal gains make the winner, the technology around the racers keeps track in precious detail, there are split-second chronographs and finish line cameras, and the results are factored down to a minimum. The title of an official timekeeping partner a watch brand receives not only for the investments across the broadcast partners of an event or a chance to place a logo on a hood. Most important, it has to provide innovative and dependable timekeeping systems.

Edox has been the official timekeeper of the FIA World Rally Championship (WRC), the Dakar Rally, the FIA World Rally Cross Championship, and the former Formula 1 team Sauber; it has a long history of involvement in the car racing world. Edox announced the new partnership with BMW M Motorsport in 2021, and two Edox BMW M Motorsport-themed chronographs with quartz movements were added to the Chronorally collection. Both were launched as limited editions, and both are no longer available, according to the Edox official website. The Chronorally collection has been around since 2008, when a chronograph with technical functions specially developed for rally drivers was presented. An innovative Chronorally watch could measure up to twelve lap times in analogue and accumulate electromechanically. The oversized start and stop pushers and the overall rally-inspired design of the Chonorally attracted the public eye – and laid the foundation for a famous collection of quartz and mechanical chronographs found in the current Edox catalogue. The Chronorally Automatic series are pretty recent, with five references to choose from. The black and brown-beige dial distinguishes the new Edox Chronorally Automatic with plenty of orange details. The hour indexes, the central seconds hand and the hands of the two sub-dials at 6 and 12 o’clock are all bright orange. Still, they are nicely downplayed by the black base part of the dial on which sit the sub-dials and other black-coloured features – the oversized black pusher at 2 o’clock, the tachymeter ring and a black rubber strap with the tire pattern. The choice of titanium for the 45mm diameter round case with 15,8mm thickness increases the sporty and technical feel; the see-through caseback looks like a rim with a low-profile tyre generally used for racing or to convey a sporty image to the vehicle. The watch peeks large but weighs only 133 grams and seems comfortable to wear. The crown and the characteristic big pusher are protruding, not to bother, but still, I would suggest trying on the Chronorally Automatic before buying. 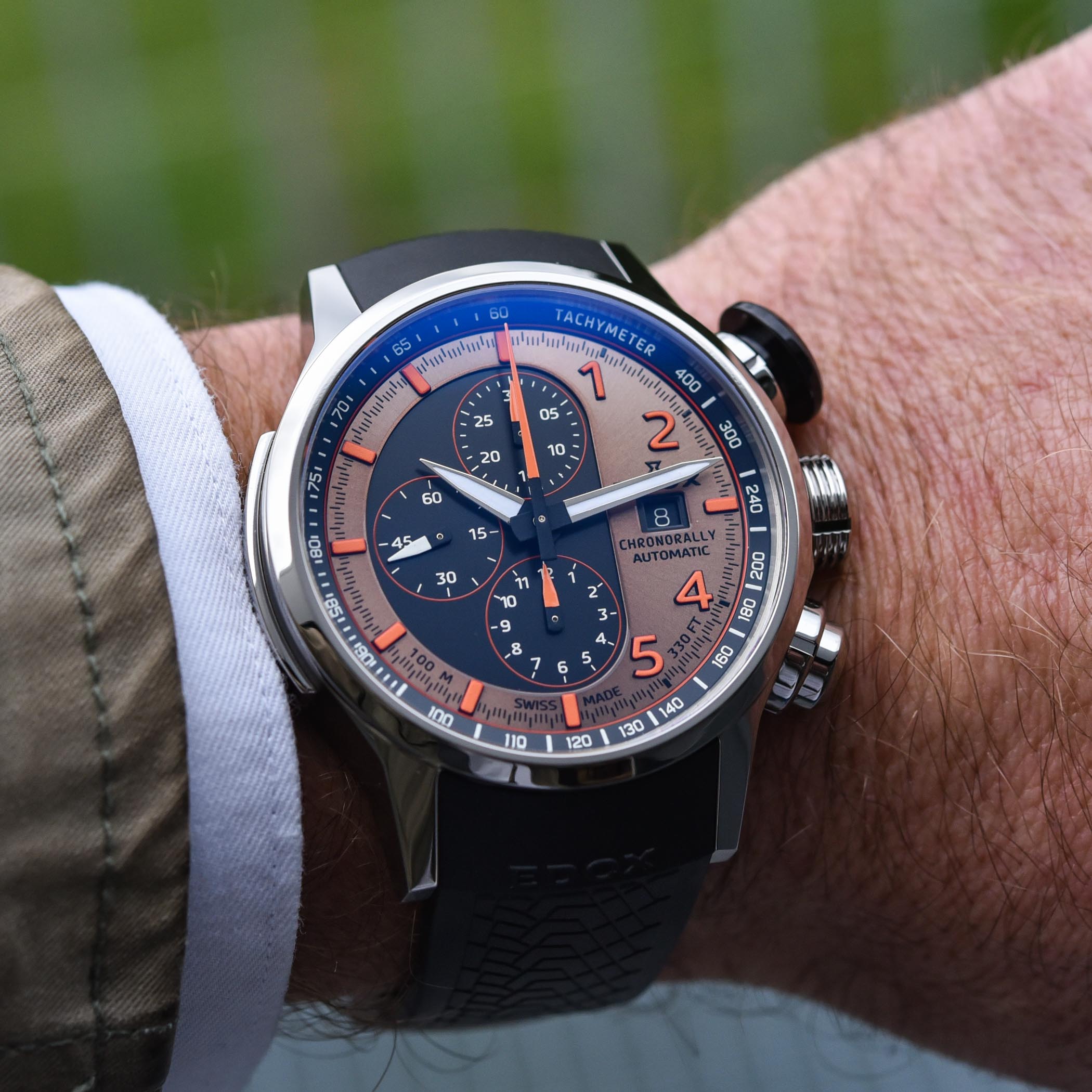 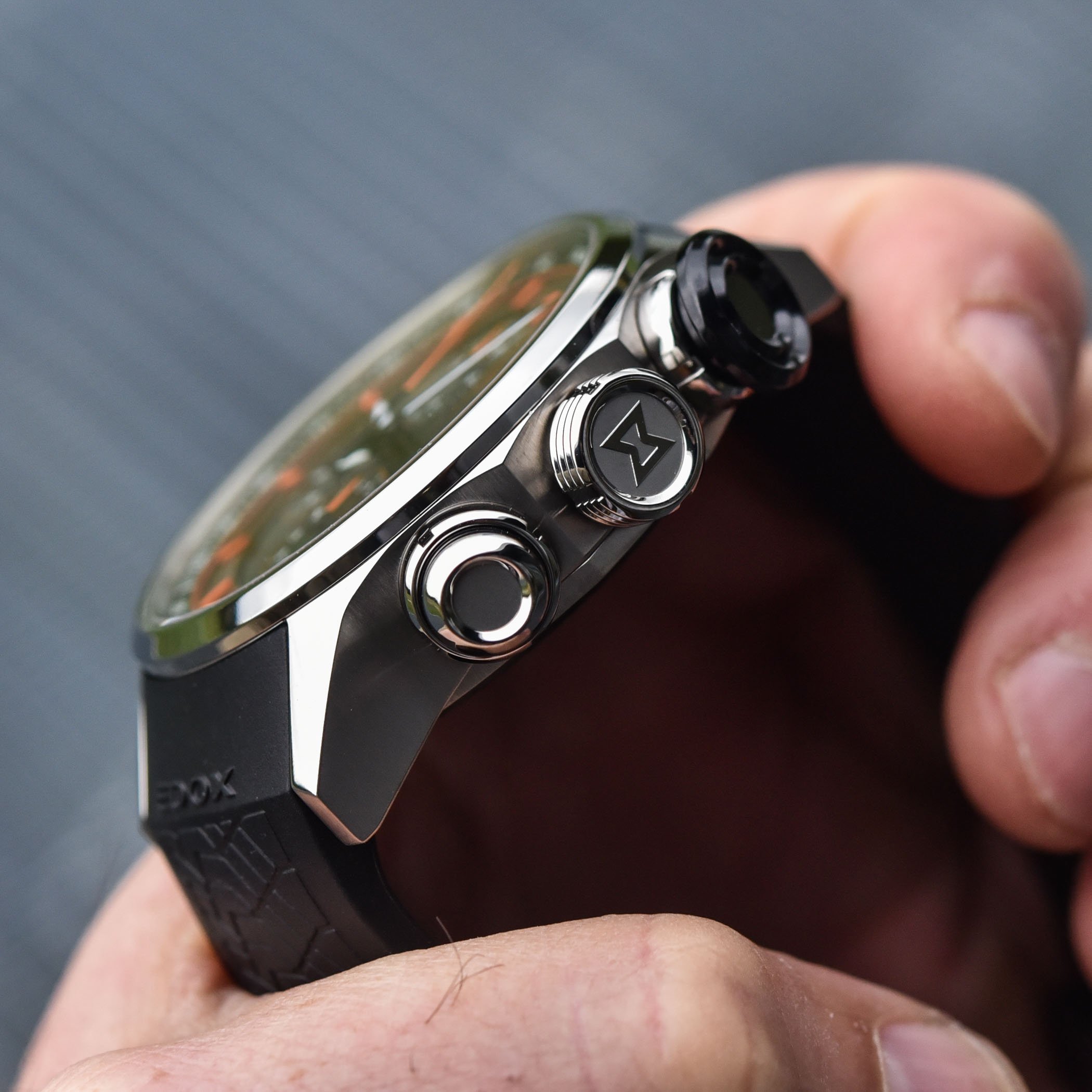 The Edox Calibre 011s – an SW 500-based self-winding automatic chronograph movement – with simple decoration brings the watch to life, and it does the job well. It will run for up to 48 hours on power reserve and keeps good accuracy. As for the décor, I humbly refer you to the decoration of a racing car interior section – not a pretty sight. Everything screams functionality, which is a beauty in this case. Speaking of functions – the Chronorally Automatic is, first and foremost, a chronograph with a central stop second, 30-minute and 12-hour counters, and it has a date indication. The robust sapphire crystal and double o-ring technology for the crown and the pushers allow water resistance up to 100 m. The Edox “master lock” pin buckle will ensure the Chronorally Automatic is secured on your wrist, and the oversized pushers are inviting – rarely have I felt so compelled to use the chronograph.